For many engaged couples, the guest list is the first battleground of wedding planning: many factors, including the budget, overall vision, and venue capacity can make determining who gets the invite a difficult decision. One solution for trying to include as many of your loved ones as possible? Creating a “B-List.” 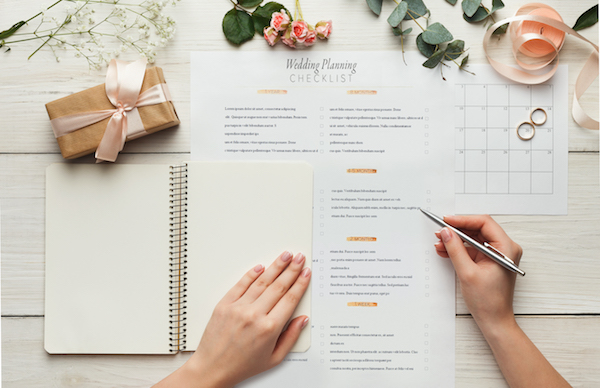 A “B-List” means that couples send invitations out in two rounds. The first group of invitations goes to the closest family members and friends.

As their RSVP’s begin rolling in, couples then send additional invites to the second round of guests based on the number of guests in the first round who are unable to attend.

While a “B-List” seems like a workable way to tame a growing guest list, it can end up creating another problem: if guests find out they didn’t make the initial cut, they may feel offended.

So in this month’s edition of “Ask a Real Bride,” we’re asking couples who used a “B-List” how they made every guest feel like they made the “A-List!”

“Initially, our “A-List” was just family and a few close friends. When we realized we had a few extra spaces available, we extended invitations to our coworkers.” –Elizabeth M.

This is a great strategy because the group of coworkers is completely separate from the family and friends who got the invite first. Take a look at your “B-List” and be sure that they don’t interact with your “A-List” guests often. For example, you wouldn’t want to put some cousins on the initial guest lists, and their siblings on the second guest list. The same goes for coworkers: don’t put some on the “A-List” and then invite others later. The “B-List” should be reserved for distinct groups of friends or relatives who won’t know that they’re receiving an invitation months later.

“We needed a B list because our venue was tight on numbers, and our family is huge! Obviously everyone that was at our wedding would have been on the “A-List” ideally, but that just wasn’t an option for us. We sent out the first batch of invitations with an earlier RSVP date. Then once we had a better idea of numbers, we sent out a second batch of invitations to the “B-List” with a later RSVP date, but still within a reasonable timeframe so it didn’t seem like they were an afterthought.” –Mandy Z.

I love this strategy of printing two sets RSVP cards with later dates! If you’re concerned about estimating the later date for the “B-List” invitations, the response card could simply say: “The favor of a prompt reply is requested.”

“Our max was 100 people. We sent out about 120 invitations. We had like 96 or 97 RSVP yes, so we ended up contacting some people we originally thought we weren’t able to invite (like the parents of some of our best friends) and asking if they’d like to come. They completely understood and ended up coming to our wedding, which was very sweet!” –Camile L.

“A few months before we got married, we joined a couples group at our church. When we had a few more guests than we expected RSVP “no,” we called some of our new friends and asked them to celebrate with us. Since we had recently met, they weren’t upset at all! It was awesome to have our new friends join us on our big day–especially since we’ve become much closer since then!” –Lauren P.

“We really weren’t sure if we could include my teenage cousins at our wedding. When a few of our friends RSVP’d no, there was suddenly room for them to come! Being 15 and 16 years old, they were thrilled to get dressed up and join their parents at the wedding.” –Elise F.

While sending a printed invitation is always preferred, there are some groups of friends that won’t mind receiving a personal phone call a few weeks before the wedding. Notice that in Camile’s case, her last-minute guests were not relatives, and Lauren’s guests were new friends. Elise included her cousins last-minute, who were understanding because of their age and the fact that their parents were already included on the “A-list.” This strategy only works when there is relational distance involved, or with recent acquaintances. Also, a short-notice invite should only be extended to local guests, never those who would need to travel.

Proceed with caution: your “B-List” guests should be people who will be unaware of their secondary status, and sending an amended RSVP card is an effective strategy for maintaining secrecy. As with every rule, there are exceptions: distant or new friends, as well as younger family members, might not mind a last-minute personal invite!

I hope the advice from our real brides helps you determine if a “B-List” is for you–and that each of your guests feels honored to be part of your big day!

Written by Christina Peterson, who unfortunately had to have a B-List due to having an huge family that quickly filled up her A-list.

Yes we talk about wedding gifts and wedding etique

A dad is a daughter's first love. Happy Father's D